The logic of the pictures. Logicomix

I have participated at many presentations of the book Persepolis with Marjane Satrapi when it was published in Italy and I can testify that on each occasion there was someone who asked the author the same question: “Why, instead of producing a comic strip, did you not produce a book to tell this story?” Marjane took the tome in hand and repeated the same words: “But I have made a book.” Behind this apparent misunderstanding there is a definite cultural block , a sub-conscious and latent prejudice, that is that a comic strip even in the form of a book is still not adult enough to be considered as such. As though the form perforce becomes the content. As though the pictures automatically lower the quality and the reliability. The images betray, and yet images have always been the primary narrative form of the human race. And the comic strip is no more than a part of the evolution of narrative imagery. But it is as though the magical and subversive power, the uncontrollable force (even though we would need to think about that…) of the images condemn their usage and limit their ability to recount stories and discuss matters. 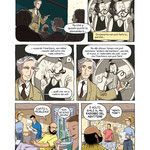 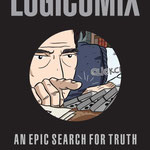 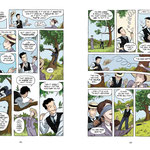 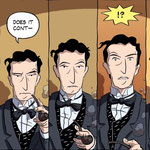 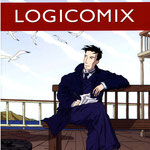 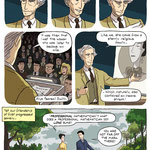 It is true that there are examples of the presence of mathematics and its themes in the comic strip, even in popular ones such as Martyn Mistere, Lazarus Ledd and others: in certain examples the evocative, highly metaphorical nature of the expressions or key words of mathematics are used to sharpen the elements of mystery and fascination of the tale. There are also more expansive stories, even if they are somewhat didactic, such as Ultima lezione a Gottinga in which the interweaving diverges from a setting in the Nazi era (it seems that it has become a leitmotiv for the comic strip) in order to address Cantor’s theory of infinity. Mathematics, but physics and science too, has not only supplied the world of the comic strip with some ideas, but also with visual challenges.

Logicomix certainly opens up another chapter on the comic strip’s capability to narrate: not so much in terms of its form (the style of drawing is traditionally French), but certainly in the way in which it addresses the content, that is not just the biography of genius and folly, but the possibility of representing questions of logic and ethics, by telling a story.

Centred on the figure of Bertrand Russell, Logicomix. An Epic Search for Truth, was a publishing event not only in Greece, where it was published in 2008 by the prestigious publishing house Ikaros, but also in Holland and particularly in the United States, where it sold out on the day the first edition was released, also getting onto the best seller list of amazon.com.

The publishing success of the project probably lies in the vitality that enables even those not used to the matter to get to grips with fascinating and complex themes.  The narrativity that uses the authors’ framework as a guide in the questions that conduct the recounting of the life of Russell, the choice of expanding the biographical aspects of Russell himself in a direct and involving manner, making them recount them in the first person, may in part explain how this book has excited a much wider audience than that of designer comic strips.

Russell’s ultimate objective, the creation of an absolute foundation for mathematics and logic, has always been an elusive and obsessive dream and the authors of Logicomix have succeeded perfectly in conveying the sense of nostalgia in Russell’s life for this goal that turned out to be impossible. The main theme of the book can be summarised like this: the tension between rationality, precision, certainty and the human world of passions.  In defining the terms and the testing of the systems of correspondence, Russell does not budge in an isolated context and through his story we meet other fathers of modern logic, characters of the stature of Frege, Cantor, Dedekind, Hilbert and further Whitehead and Wittgenstein.  The great ability of the screenwriters, Apostolos Doxiadis and Christos H. Papadimitriou, lies in the skilful process of re-elaboration, simplification, reduction and invention, not simply narrating a story of mathematics and logical thought, but intervening in the flow of the story in the first person, posing doubts and questions on the work itself and reflecting out loud on the development of the story.  The strong point of this book is its reflecting on the narration, to pose therefore another challenge to the capability of the comic strip: in fact then, this metanarrative approach matches to some extent the logical capability and the reflection on mathematics.